Ronald Charles Speirs was born on 20th April, 1920 in the Scottish city of Edinburgh.1 He was the youngest of five children for parents Robert Craig Speirs, Jr and Martha Agnes (McNeil) Speirs, 2but his stay in Scotland was to be short.

Robert Speirs, Ronald’s father, was born in Greenock, Scotland in 1882.3 His engineering career began as a young man when he became an apprentice engineer fitter in the Glasgow area.4 Around this time, Robert met Martha McNeil. They were married in 1908 5and lived in Dalmuir, just outside Glasgow. By this time, Robert was a journeyman engineer.

Robert and Martha left Glasgow in 1908 as Robert went to work at the shipyard in Devonport, Plymouth, England. He was responsible for fitting out the large guns on the Royal Naval battleships which – according to family legend, included HMS Hood.6

Whilst in Plymouth, Robert and Martha had had three daughters and a son.7 The family left Devon and moved back to Scotland in 1918 and it was during this time, in Edinburgh, that Ronald was born.

When the Armistice, which ended WW1, was signed on the 11th November, 1918, Britain’s great ship-building industry began to wind down. As a result, Robert saw many men leave to pursue opportunities abroad in America. Many years later, Ronald Speirs would write, “my father was a Scotish Engineer who emigrated to the U.S. because of the lack of employment in the UK during the depression.”8

Initially, Robert travelled to America alone. So when he found work in Boston with Hunt Spiller Co., a company known for their high carbon gun iron, it would mark the start of a steady and profitable engineering career in the USA. Robert now began planning for the family to join him.

Martha and their five children boarded the SS Winifredian in Liverpool on 13th December, 1924,9 sailing for Boston to be reunited with Robert. The ship docked at Boston Harbour on Christmas morning, 1924.10

Once there, the family lived in the Suffolk County section of the city11 among a large population of recent immigrants, primarily of Scottish-Irish heritage. 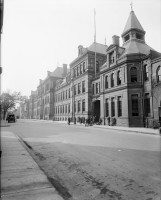 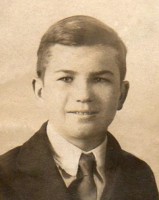 Ronald spent his child and early adulthood in Boston, though records show during the summer break, when Ronald was between 8th and 9th grades, he and his parents sailed back back to the UK on the MV Georgic, part of the Cunard White Star line, from Boston.12 The journey took them through New York and Galway in Ireland before docking in Liverpool on 25th June, 1934.13 They returned to Boston two months later.14

Ronald attended the Boston English High School, graduating in 1938.15 He later wrote, “my first experience with the military was in high school. Close order drill was taught by two regular army officers. They encouraged the students to attend Citizens Military Training Camp (CMTC) during the summer vacation. CMTC for the infantry was held at Great Diamond Island in Portland, Maine.”16

After finishing high school, Ronald went on to study at Bentley College, graduating with a certificate in accounting17 which enabled him to find employment as a junior accountant.18 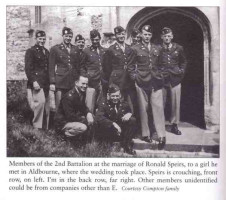 Ronald Speirs’ first marriage took place on 20th May 1944 to an English girl he met whilst stationed in Aldbourne, Wilshire, England.19 Speirs recalled, “before the invasion, I was sent down to Winchester to set up a camp for an infantry division coming up from Africa. There I met my English wife who was a member of the ATS, the British women’s service.”20 They married in the local village church of St Michaels at Aldbourne, where fellow paratroopers Lt Fredrick Heyliger and Lt Herbert Viertel acted as witnesses to the marriage.21

The girl Speirs married was a spinster and her marriage to Speirs was her first.22,23,24,25 After the war ended, she decided she could not bear to leave her close knit family to go to live in America.26 It is known that Speirs was terribly upset by this turn of events.27 It is also known that Speirs said she was the love of his life, and that he clearly always loved her.28,29

This marriage produced a son who was to be Speirs’ only child.30 Speirs never lost contact with his son Robert and remained a presence in his son’ life. In fact, as the boy grew up, contact between father and son also grew.31 It is known that Ronald Speirs accompanied his son to his first day of preparatory school in England and attended other significant events in his son’s life.32 Speirs was “treated as a member of the family” on these occasions.33

As grown man with children of his own, Robert and his family would often stay in America with his father and Speirs would “exchange visits with his son.”34 Speirs wrote many years later, “my son Robert, born in England during the war is a Major in the Royal Green Jackets” and continued “his three beautiful children are my pride and joy.”35

Ronald Speirs’ son retired from the British Army as a Lieutenant Colonel – the same rank as his father, and Speirs wrote, ”I am very proud of him.”36

Inaccurate information surrounding his marriage as published in the book Band of Brothers, upset and angered Speirs because “my English wife was not a widow as the book stated.”37 Speirs continued, “The other reference to her in the book was disparaging.” 38 Speirs also states, “I loved her and still do.”39

Speirs thought it would be “embarrassing” 40 to show his son the book and wrote “someone should have verified the facts with me before printing.”41 Subsequently, Speirs sent a copy of Band of Brothers to his son in which he wrote “there are stories in here you need to take with a pinch of salt.”42 As a result of these inaccuracies, Speirs declined to do any publicity interviews.43

The love and concern Speirs still felt towards his English wife, was once more shown as work began to adapt the book Band of Brothers into a TV show. Once again, he tried to protect her reputation. Speirs demanded “all comments about my English wife be eliminated”44 and states “this is all I care about.”45 Again he mentions, “she was not, as you stated a ‘widow’ at our marriage.”46 Speirs writes, “she was a wonderful person.”47

The passenger manifest of the Queen Mary shows Speirs leaving England in January of 1946 as a Company Commander with 82nd Airborne Division. After his return to the States, Speirs and his English wife were divorced under US law.48

Ronald second marriage – to a war widow whose first husband was killed in 1944 – took place on 8th May, 1950, at Maxwell Air Force Base, Alabama.49 It is unknown when this marriage was dissolved, but records show a third marriage on 12th July, 1958 in Berlin, Germany.50 This union is known to have lasted until divorce in 1966.51

It is unclear if Speirs had a life partner between his divorce in 1966 and final marriage – which took place in 1987 when he was 67 years old.

* Ronald Speirs wrote a letter to Stephen Ambrose which he dated 29/01/1981. However, evidence suggests Ronald Speirs inadvertently wrote the incorrect year and the letter was in fact, written in 1991. In his letter Speirs states he is 71 years old. Born in 1920, Speirs would have been 71 years old in 1991 – not in 1981. Also, according 101st airborne historian Mark Bando, a former E Company veteran “was a regular lunch partner with Professor Ambrose in the 1980’s, when Ambrose was thinking about writing a 101st book.” Other sources state that Ambrose visited a reunion of Easy Company veterans in 1988 and collected their stories, which formed the book Band of Brothers. Therefore, Ambrose would have had no reason to write to Speirs in 1981.