During the summer of 1944, the 101st Airborne Division rested and refitted at the camps they had occupied during the build-up to D-Day. For Lieutenant Speirs and Dog Company, this meant billeting back at Aldbourne in Wiltshire. During this time, the 506th PIR received replacement paratroopers to take the place of those killed or injured during the Normandy Campaign.

Due to the success of the airborne divisions in Normandy, General Eisenhower – Supreme Allied Commander – decided to expand and unify the Allied Airborne Forces and ordered the creation of the First Allied Airborne Army which was formed on 2nd August, 1944. This was a multi-national force which included the 82nd and 101st Airborne Divisions, the Polish 1st Independent Parachute Brigade and the British 1st and 6th Airborne Divisions.

Pivotal to the operation’s success was the capture of various bridges in Holland (including those that crossed the Meuse River and those across the Waal and lower Rhine Rivers) by the airborne divisions and the rapid advance of armoured divisions travelling overland along a single highway from the Belgian-Dutch border.

The two – airborne and armoured – would join up and advance across each strategically captured bridge. Upon successful completion the Allies would establish a bridgehead across the Rhine having bypassed the Siegfried Line – a fixed line of German fortification which included defensive forts, pillboxes and strongpoints designed to prevent a direct attack against Germany.

D-Day for Operation Market Garden was 17th September, 1944, and in full daylight the largest airborne operation in history dropped paratroopers of the First Allied Airborne Army into Nazi occupied Holland. 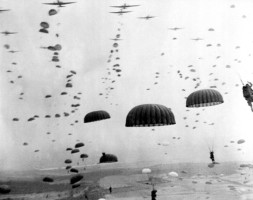 2nd Battalion of the 506th PIR – which included Lieutenant Speirs’ Dog Company – was in the thick of much of the action during Operation Market Garden. Moving towards Eindhoven in columns (3rd battalion followed by 2nd battalion with 1st battalion at the rear), they came under fire from two German 88mms artillery guns as they reached the outskirts of the town. Dog Company, along with the rest of 2nd Battalion was ordered to flank left and attack. This manoeuvre proved crucial and allowed the regiment to secure Eindhoven with little loss of life. Once Eindhoven was secured the primary objective of the 101st was the defence of Hell’s Highway as it was imperative the road be kept open to allow the movement of troops, equipment and supplies.

Over the coming days the Germans attacked and counter-attacked at various positions along the highway, such as Eindhoven, Son, St Oedenrode and Veghel. General Taylor likened the action to the bushwhacking style of fighting between small garrisons of troops and sudden attacks by Indians in the American West.1

German forces also launched a major assault aimed at capturing the highway bridge over the canal south of Veghel. On learning of the attack, two senior commanders of the 506th – General McAuliffe and Colonel Sink – hurried towards the canal where they encountered Lieutenant Speirs and his Dog Company moving north to Uden as ordered earlier and unwittingly heading directly into a vastly superior enemy force. General McAuliffe immediately countermanded these orders and Speirs and Dog Company stayed to fight alongside the Battalion in some tense action at the bridge.

On 28th September the 101st was put under command of the British XII Corps and positioned on a front line known as the Island – a small area of land between the Neder Rijn (Lower Rhine) and the Waal River. There was only one significant battle during the time the 101st spent on the Island which occurred in the morning of the 5th October, when the Germans launched an attack to capture Opheusden.

During the fighting, 2nd Battalion were positioned along the Lower Rhine and Lieutenant Speirs took a squad to the river bank where, under the cover of darkness, he rowed alone across the Lower Rhine. Stowing the boat, he waited for dawn and began to recon the enemy territory. He noted the positions of enemy machine-gun nests and headquarters. When discovered, he ran for the river, drawing enemy machine-gun fire. Wounded in the buttock and hip, Speirs dived into the river and swan back to friendly forces on the south bank. He was discovered exhausted and bleeding by a member of his Dog Company and evacuated for treatment. Speirs was sent to the 203rd US General Hospital in England. Meanwhile, the 101st Airborne division stayed on the Island until late November when they withdrew to Camp Mourmelon, France.

Market Garden failed to achieve its main objective of establishing a bridgehead over the Rhine into Germany. This has often been described as ‘a bridge too far’. Failure was caused by a number of reasons, including poor intelligence, over-confidence in planning and inclement weather. The Allies completely underestimated the strength of the German Army which was believed to be severely weakened after the Normandy Campaign. However, the operation was beneficial insomuch as it engaged many of Hitler’s forces in a major offensive and allowed the British to hold and expand the port of Antwerp.

Speirs was awarded the Silver Star Medal for his solo reconnaissance of German held territory in the north of the Lower Rhine River on 10th October, 1944. The citation can be found in the Citations, Medals and Decorations section of the website.