In early February, 1945, the 506th PIR relieved an infantry division and moved away from the front line, to take up duties in the city of Haguenau, on the Moder River – a branch of the Rhine. Speirs and Easy Company were to hold positions and buildings on the South bank whilst the Germans held the buildings on the North bank.1

Easy Company did not openly attack the enemy during this time because they had simply been ordered to hold the line, but there was the ever present danger of snipers and periodic bursts of artillery fire. So once appraised of German positions on the Northern side of the bank, Speirs worked out a reconnaissance mission to capture some German prisoners – which was successfully achieved.2

By mid-February, Easy Company was moved into reserve and prepared to go back to Mourmelon, France.

While in reserve, Easy Company were ordered to follow a rigorous training schedule. According to the book “Band of Brothers”, author Steven Ambrose says that this was something Speirs thought was an “idiotic proposal” and that he made no efforts to conceal his sentiments. Ambrose adds that Speirs’ told the men of Easy Company that he believed in training hard and sensible in base camp but in taking it easy in reserve.

Despite this, Ambrose suggests that Speirs spent his time in reserve usefully. He held the regimental lottery, drawing the names from a steel helmet which allow the winner, one man from each company, a 30 day rotation back to the States.3 He was also responsible for the Battalion review. One source states that, ‘Speirs’ philosophy was to avoid the unnecessary but to do properly and with snap the required.’4

Within a few weeks, on 25th February, the 101st Airborne began their journey back to Mourmelon, France, in railway boxcars.5

Concluding this period, was the presentation of an historic award. The Presidential Unit Citation for Bastogne was awarded to the 101st Airborne Division on 15th March, 1945 at Mourmelon, France. This was the first time ever in the US Army that an entire division was accorded this honour.

By the end of March, orders were received to deploy to the Rhine, and over the coming weeks Speirs and Easy Company found themselves travelling through various towns and villages in Germany. While in Dormagen, Easy Company guarded a displaced persons camp and Speirs arranged a trip to nearby Cologne so his soldiers could see the effect of aerial bombing on a city.6

In late April, the 101st Airborne Division was assigned to US Seventh Army and were deployed to Bavaria and the Alps.

The town of Berchtesgaden, home to top ranking officials and members of the Nazi party was taken and occupied by 506th without a shot being fired. Companies of the 506th, including Easy, were besieged by surrendering German soldiers. Berchtesgaden held one special treasure – it was also home to Hitler’s fabled Eagles Nest.

In the eyes of the conquering Allies, Hitler’s Alpine retreat, the Eagle’s Nest, was a prized trophy. Perched on a ridge at the top of the Kehlstein Mountain in the Bavarian Alps, this chalet styled building afforded panoramic, eyelevel views of the Alps.

Falling within Speirs and Easy Company’s zone of occupation duty, in retrospect it could be said to be fitting that the Screaming Eagles would capture the Eagles Nest.

Once at Berchtesgaden, the 101st Airborne discovered Hermann Goering’s pilfered art collection which was catalogued and various items subsequently put on display before being taken to the allied authorities in Munich.7 Two of Easy Company’s sergeants also found Hermann Goering’s luxury Mercedes car – immediately informing Speirs, who took to the wheel and enjoyed a journey through Berchtesgaden and the surrounding countryside.8 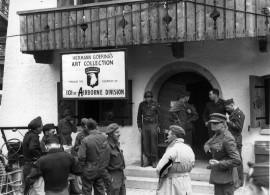 The entrance to the former Luftwaffe headquarters at Konigsee where Hermann Goering’s loot has been put out on display by the soldiers of the American 101st Airborne Division. The collection includes priceless artworks and ornaments and was found hidden a cave in the area.

In early May 1945, 506th PIR moved to Zell am See, a town south of Berchtesgaden and the Battalion HQ was set up in the village of Kaprun. Captain Speirs and Easy Company continued with occupation duty and oversaw the processing of Displaced Persons, maintained order and dealt with surrendering German soldiers. The company also conducted various patrols.The war in Europe was all but over and Easy company relaxed. Ambrose’s book sheds further light on this time: ‘Mountain weather, unlimited sports, women and booze and easy duty.’9  Not even  Speirs was immune and ‘spent VE Day throwing his empty champagne bottles off the balcony of his chalet and shooting them with a .45 pistol.’10

Towards the end of June, the 101st Airborne Division were told that they would be deploying to the Pacific. In anticipation of this, Speirs told Easy Company, ‘The party’s over. Training schedule starts full force – train in the morning and compulsory athletics in the afternoon. I’m going to make soldiers out of you men again.’ One soldier in Easy Company – Private Burt “Pat” Christenson commented, ‘Speirs is really going GI.’10The 101st Airborne returned to France at the end of July, this time to barracks in Joigny. On 2nd September, 1945, Japan surrendered which brought World War II to a close. It also meant 101st Airborne Division would no longer be required in the Pacific Theatre.

On 30th November, 1945 the 101st Airborne was inactivated and Easy Company no longer existed.12

Captain Speirs returned to the United States from England in January 1946, on the Queen Mary – this time as a company commander with 82nd Airborne Division.