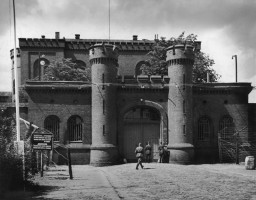 By 1957, after half a decade taking up management positions back in the USA, Major Ronald Speirs took another change of direction in his career. He was assigned as US Director of Spandau Prison in Germany on 16th July, 1957 – a move reflected in his military records by MOS number: 9121, which denotes a Prison Officer.

Spandau Prison was built in 1876 and was originally used to incarcerate military prisoners. However, in 1919, German authorities began interning civilian prisoners at Spandau, which held up to 600 inmates.

In 1945 the Allies held the first International War Crime Trials at Nuremberg and Spandau Prison was used to intern Nazi War Criminals who were found guilty. The prison was located in the borough of Spandau, in West Berlin which lay in the British occupation zone.

By the late 50s, an agreement amongst the Allies meant that control of the prison would rotate on a monthly basis as shown.

However, just a month after taking up the post of US Director at the prison, on 15th August, 1957, his MOS number changes. Military records record a MOS number: 9300 signifying he is now working as a Military Intelligence Officer. During his tenure as a Military Intelligence Officer, Speirs worked closely with the Russians and it is known he found them ‘odd’. 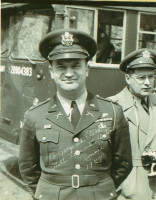 After his duties at Spandau Prison were finished, Speirs stayed on in Germany.

On 11th February, 1958 Ronald Speirs was promoted to Lieutenant Colonel.  Berlin Military records show that by 12th July, 1958 his MOS number: 0001 records his duties as unassigned while he waits for his next

redeployment. A further change to his MOSnumber occurs on 31st July, 1958 which now shows as: 1542. This designates an Infantry Unit Commander and but his duties are as Executive Officer at the Headquarters of 12th US infantry, United States Army in Europe (USAREUR).

On 16th December 1958, Speirs, remaining in his post as Executive Officer, is redeployed with 12th US Infantry Division to Fort Riley, Kansas.

Meanwhile, Spandau Prison remained in place until 1987, when it was knocked down to prevent it from becoming a neo Nazi shrine. The rubble was dumped into the North Sea.