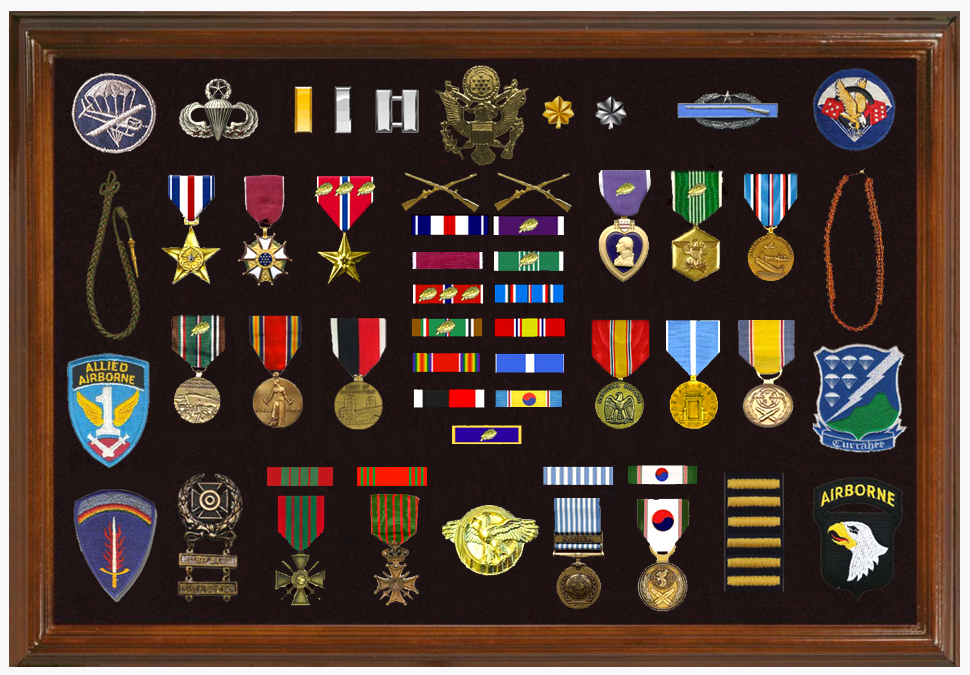 Explanation of Medals, Awards and Citations

The Silver Star: The third highest military decoration for valour. Awarded for gallantry in action against an enemy of the United States.1

The Legion of Merit: Awarded to any member of the US armed forces who has distinguished himself or herself by exceptionally meritorious conduct in performing outstanding services and achievements.2

The Bronze Star: The fourth highest individual military award and the tenth highest by order of precedence. It may be awarded for heroic or meritorious service while engaged in an action against an enemy of the United States.3

Purple Heart: A military decoration awarded in the name of the President to any member of the US military who has been wounded, killed, died or died of wounds received     in action against an enemy of the United States.4

Army Commendation Medal: A decoration which is presented for sustained acts of heroism, meritorious service and valorous actions in direct contact with an enemy.5

American Campaign Medal: Awarded to personnel who served within the American Theatre of War covering 7th December 1941 to 2nd March 1946. The recipient was to have served on permanent assignment outside of the US soil.6

European African Middle Eastern Campaign Medal: This medal recognizes those military service members who performed military duty in the European Theatre – including North Africa and the Middle East – during the 7th December 1941 – 8th November 1945 years of the Second World War.7

WWII Victory Medal: A campaign medal which was established by an Act of Congress on 6th July 1945. The medal is awarded for service between 7 December 1941 and 31 December 1946.8

National Defense Service Medal: Originally commissioned by President Eisenhower as a blanket campaign medal – which is awarded to any member of the United States Armed Forces who served honourable during a designated national emergency. For the Korean War this time period was 1950 – 1954.10

Korean Service Medal: Created in November 1950 by executive order of President Truman, this medal is the primary medal for participation the Korean Ward awarded to any United States service member who performed duty in the Republic of Korea between 27th June 1950 and 27th July 1954.11

Armed Forces Expeditionary Medal: Recognizes the services of the Armed Forces who participated in the increased involvement of the American military in peacekeeping activities. Created by President Kennedy – as per Executive Order 10977, dated 4 December 1961 – for operations on or after 1 July 1958.12

The fourragére: is a military award, distinguishing military units as a whole, that is shaped as a braided cord. The award has been firstly adopted by France, followed by other nations such as the Netherlands, Belgium and Portugal.13

United Nation Service Medal (Korea): The first international military decoration established by the United Nations on 12th December 1950 which recognized the multinational defense forces which participated in the Korean War. Awarded to any military service member of an Armed Force allied with South Korea, who participated in the defense of South Korea from North Korea between 27th June 1950 to 27th July 1954.18

United States Presidential Unit Citation: Normandy and Bastogne. The Presidential Unit Citation is the Nation’s highest unit award. It is awarded to units of the United States Armed Forces for extraordinary heroism in action against an armed enemy of the United States. The unit must display such gallantry, determination, and esprit de corps in accomplishing its mission under extremely difficult and hazardous conditions so as to set it apart from and above other units participating in the same campaign.19

Republic of Korea Presidential Unit Citation: A unit award issued by the government of South Korea to both South Korean and foreign military units for service in Korea from 27th June 1950 to 27th July 1953.20

Oak Leaf Cluster: An oak-leaf cluster is worn to denote a second or subsequent award for which the military personal has already received the initial decoration or award.21

Arrowhead Device: Worn to denote participation by a U.S. Army Service member in a combat parachute jump, combat glider landing, or amphibious assault landing, while assigned or attached as a member of an organized force carrying out an assigned tactical mission. A Soldier must actually exit the aircraft or watercraft to receive assault credit.23

Combat Jump Device: For each airborne jump a solider makes into a combat zone, they are authorized to wear a Combat Jump Device on their Parachutist Badge. The device consists of a star or arrangements of stars, indicating the number of combat jumps.24

Master Parachutist Badge: Awarded to individuals rated excellent in character and efficiency who have participated in 65 jumps including 25 jumps with combat equipment, four night jumps – one of which is as a jumpmaster of a stick, five mass tactical jumps which culminate in an airborne assault with a unit equivalent to a battalion or larger, graduated from the Jumpmaster Course; and served in jump status with an airborne unit or other organization authorized parachutists for a total of at least 36 months.25

The Combat Infantryman Badge: An award of the United States Army which is presented to those officers, warrant officers and enlisted soldiers, in the grade of Colonel and below, who participate in active ground combat while assigned as a member of an infantry or Special Forces unit, brigade or smaller size, during any period subsequent to December 6, 1941. It was created with the primary goal of recognizing the sacrifices of the infantrymen who were disproportionately likely to be killed or wounded during World War II.26

Glider Badge: A qualification badge of the U.S. Army awarded to personnel who had been assigned or attached to a glider or airborne unit or to the Airborne

Department of the Infantry School and satisfactorily completed a course of instruction, or participated in at least one combat glider mission into enemy-held territory.27

Expert Badge with Rifle and Carbine Bar: The United States Army issues marksmanship badges three different qualification levels expert, sharpshooter, and marksman. Suspended from the badge are qualification bars that indicate the specific weapon(s) in which the soldier has qualified.28