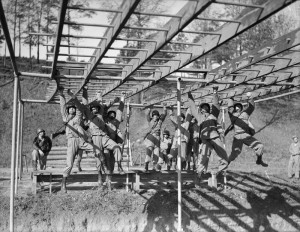 Ronald Speirs entered active duty with the US Army on 11th April, 1942 at Camp Shelby, Mississippi as a 2nd lieutenant. He was assigned to the 339th Infantry Regiment of the 85th Infantry Division for his basic training and was quickly made a Platoon Leader.

While undergoing his basic training, Speirs was selected as a candidate for a new form of training, Parachute Infantry. The extra $100 per month jump pay for Officers while on jump status, plus the opportunity to test himself against the most elite soldiers in the US military, made it an easy decision for Speirs.

Speirs was ordered to report to Camp Toccoa, Georgia as part of the newly formed 506th Parachute Infantry Regiment. Camp Toccoa was overshadowed by an impressive mountain rising abruptly some 800 feet from the surrounding terrain – a landmark that would soon be part of his training. Mt Currahee, named for a Cherokee word meaning “to stand alone,” had a difficult 3 mile climb to the summit. The trainees would come to rue that mountain, although it did its part in weeding out the weaker candidates. At least 2-3 times a week the men would run the “three miles up, three miles down.” That phrase, along with “we stand alone, together,” became part of the heritage of the 506th Regiment. 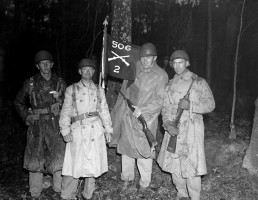 When the Regiment had finished the course at Camp Toccoa, in November 1942, it was ordered to Fort Benning, Georgia for advanced airborne training. It wasn’t until this point that the men would actually start jumping from C-47 planes in flight. Until now, they had only practised jumping from towers and mock-up planes on the ground. They would also learn to pack their own parachutes and prepare their equipment for air drops.

On 1st June, 1943 the 101st Airborne Division was formed. Two veteran regiments were taken from the 82nd Airborne Division (the 501st and 502nd Regiments) and added to the 506th Regiment, which had been unattached to any Division while undergoing training. The 101st Airborne Division, made up of the three above named regiments, was sent later in June 1943 to the “Tennessee Manoeuvres” for large scale simulated combat training. At the conclusion of these manoeuvres, the Division was sent to Ft Bragg, North Carolina until the end of August 1943. The men were then sent by train to Camp Shanks on the Hudson River in New York to await shipment overseas to the European Theater of Operations (ETO).

Lt Ronald Speirs was Platoon Leader, 2nd Platoon, Dog Company, 2nd Battalion, 506th Parachute Infantry Regiment. The 506th PIR embarked on the SS “Samaria” during the first week of September 1943. They arrived at Liverpool, England on 15th September, 1943 and were sent by train to their new camps located in villages within Wiltshire County – most notably Aldbourne and Chilton-Foliat.